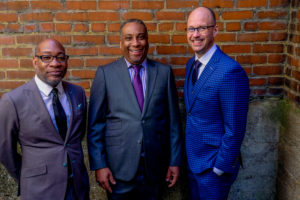 The Eric Byrd Trio have begun discussion to embark on what will be their most ambitious recording to date.  “20” is the working title TBR in January 2021, to celebrate the band’s 20th anniversary together.

“We plan on celebrating our tenure together,” said Byrd.  “We have a lot to celebrate next year: 20 years as a band, a bunch of recordings, tons of gigs and I am looking forward to playing again in front of a live crowd – especially in light of what is currently going on.”

The band has recorded 8 CD’s, the first with drummer Alphonso Young, Jr. being “The Eric Byrd Trio” back in 2002; Byrd and bassist Bhagwan Khalsa recorded 1999’s “The Fire Within” with the late drummer Mike Smith.  This Trio version became US State Department Kennedy Center Jazz Ambassadors in 2001 touring South America for 6 weeks for the very first time – hence, the band’s ‘anniversary’ year of 2001.

“Songs are still being arranged and selected but the idea is to record 20 songs.  10 of which we’ve recorded before and 10 songs representing where the band is currently,” said Byrd.  The Trio is using down time from live concerts to work on new arrangements.  The plan is to record in late summer or early fall.

“It’s a very tenuous time right now.  I believe we have the power to look at challenges as an opportunity.  So I’m choosing to look at this time as an opportunity to get better, practice, write, compose, plan for the future.  The Trio will come out of this hibernation even stronger.  The new recording will hopefully reflect that.”

Keep checking www.ericbyrdtrio.com for more news and information on the Trio.